The library finally got in the Fern Michaels Free Fall. I got it yesterday and started and finished it today. I really liked it. I am sorry to see the series end. Or has it. Maybe another chapter is being for the 7 vigilanties and their men. hmmmm....

I guess I will have to wait and see if Fern Michael's continues on with this.
Posted by Leigh Ann at 6:00 PM No comments:

Wow! What an awesome amount of reads for July! That brings the total read too: 42 books for the year so far.

I finished this book back on August 5th. Sorry for posting late. I've been busy doing canning and the scavenger hunt with my son. 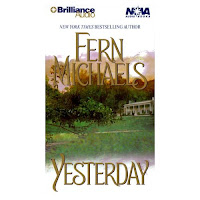 I liked it. It was alittle different in away. But an enjoyable summer read.


Here's what Publisher Weekly had to say about it:

Coming together for a wedding, four friends share memories of childhood in Michaels's (Vegas Sunrise) unevenly plotted latest romance novel, set in South Carolina. Blonde Southern belle Callie Parker is to wed arrogant Wynfield Archer, with her childhood friends in attendance: Brie Canfield, San Diego cop and prospective FBI agent; Sela Bronson, interior designer and recent divorcee; and attorney Bode Jessup. Bode became Callie's foster brother when her father brought him home from an orphanage and made him promise to make sure Callie got what she wanted, always. Brie and Sela were "white trash" local girls brought in daily as playmates to form the rest of Callie's adoring court. Mama Pearl, an aging black woman employed at Parker Manor, lovingly cared for the poor waifs, but she also reinforced Callie's princess complex. Now, emotional turmoils rise to the surface when Bode evades attending Callie's wedding. Is Bode in love with Callie? The question fades in the wake of a car crash that leaves Callie comatose, an accident caused and covered up by an inebriated Wyn on the way to their wedding rehearsal. Brie explores her memories and her feelings for Bode, and maudlin nostalgia runs rampant as each character bemoans the perfection of "yesterday," leaving the reader to wonder why someone didn't slap silly Callie years ago. Stereotypes abound: Sela's a tramp with a heart of gold; Callie is a prima donna; and Mama Pearl is Mammy from Gone with the Wind. Michaels stirs up love-drama between the old friends and wangles revelations out of Mama Pearl about Bode and Callie's secret origins and racial heritage. Many disillusionments, impassioned tears and tearful confessions later, the puzzle pieces fall predictably in place.
Posted by Leigh Ann at 3:35 PM No comments: