Well I managed to read and finish this one this afternoon (after weeding a flower bed). I liked it. Wish I knew who she was going to choose! Ranger or Morelli? hmmmmm..

From Janet Evanovich's website (http://www.evanovich.com) here is the little diddy about the book:

FEARLESS FOURTEEN
Personal vendettas, hidden treasure, and a monkey named Carl will send bounty hunter Stephanie Plum on her most explosive adventure yet.

The Crime:
Armed robbery to the tune of nine million dollars

Dom Rizzi robbed a bank, stashed the money and did the time. His family couldn't be more proud. He always was the smart one.

Joe Morelli, Dom Rizzi and Dom's sister Loretta are cousins. Morelli is a cop, Rizzi robs banks, and Loretta is a single mother waiting tables at the firehouse. The all American family.

Less than a week after Dom's release from prison, Joe Morelli has shadowy figures breaking into his house and dying in his basement. He's getting threatening messages, Loretta is kidnapped, and Dom is missing.

Morelli hires Walter "Mooner" Dunphy, stoner and "inventor" turned crime-fighter to protect his house. Morelli can't afford a lot on a cop's salary, and Mooner will work for potatoes.

Stephanie and Morelli have a long-standing relationship that involves sex, affection and driving each other nuts. She's a bond enforcement agent with more luck than talent, and she's involved in this bank-robbery-gone-bad disaster from day one.

The Crisis:
A favor for Ranger

Security expert Carlos Manoso, street name Ranger, has a job for Stephanie that will involve night-work. Morelli has his own ideas regarding Stephanie's evening activities.

The Conclusion:
Only the fearless should read fourteen

Thrills, chills and possible incontinence may result.
Posted by Leigh Ann at 6:00 PM No comments:

I started and finished RETRUN TO SUMMERHOUSE yesterday. I could not put it down and I hope that there will be a third installment in this series. Keeping my fingers crossed!

About the book by the Publisher:

Magic most definitely resides in the Maine summerhouse where the mysterious Madame Zoya has granted the innermost wishes of its visitors. Now, three women have come to this special place with one thing in common: a painful past they would each like to rewrite. Amy, who hides a heartbreaking loss behind her seemingly perfect marriage and family...Faith, a widow in her thirties whose deepest grief is for a man from years ago...and Zoë, an artist shunned by her hometown for reasons she doesn't know, after a traumatic night erased her memory. With their mystical powers, Madame Zoya and her sister Primrose are about to transport the trio to eighteenth-century England to alter Amy's ancestry. But although surprises await each of them, will stepping back in time bring the women the happy endings they seek?
Posted by Leigh Ann at 6:40 AM No comments:

I am now reading Return to Summerhouse by Jude Deveraux and I also have the new Janet Evanovich too! Fearless Fourteen will be my next read!
Posted by Leigh Ann at 6:30 PM No comments:

I've been doing some reading this past week and have really enjoyed the books. One is by one of my favourite authors Fern Michaels.

Its book 10 in her sister series and this one is just as good as any of the others. Its called FAST TRACK.

Here is alittle ditty about the book:

When You Need The Best, You Need The Sisterhood…
It’s been years since the members of the Sisterhood first banded together, with the help of their mentor Charles Martin, to exact their own form of justice on those whose crimes had gone unpunished by the legal system. Now, back in the United States after an enforced exile, and ensconced in a new home on Big Pine Mountain in North Carolina, Myra, Kathryn, Annie, Alexis, Isabelle, Yoko, and Nikki are breathing easy at last—but not for long. One dark night, under cover of a vicious storm, a helicopter lands on their mountain. The Sisters aren’t about to wait to be ambushed. Braving the storm, they set out to greet their guests, only to be told by Charles that the mysterious visitors are the Sisterhood’s new employers, and they’ve got a dangerous new assignment in mind. The task they face is daunting. If they succeed, the Sisterhood will be rewarded beyond their wildest dreams. If they fail, they’ll forfeit much more than a paycheck. But if the Ladies of Pinewood have learned one thing over the course of their adventures, it’s that when friends band together, miracles can happen…

Book 10 that I read is by Jude Devereaux and its called THE SUMMERHOUSE. I liked it and am now reading the next book. 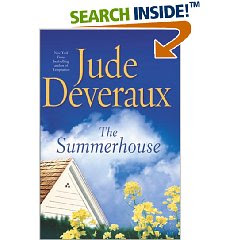 Here is what a description of the book by amazon.ca:

From Amazon.com
What if a woman could go back to the beginning and rethink her choices for love and life? When Leslie Headrick, Madison Appleby, and Ellie Abbott first met, they were in their early 20s and the world lay before them with its infinite possibilities. Now that they're about to turn 40, they reunite for a weekend at a summerhouse in Maine where they share the details of their lives during the past 20 years. Each woman has serious doubts and questions about the path she chose to follow, but none of them suspect the startling opportunity they're about to be offered to relive those choices and change their futures.
Posted by Leigh Ann at 6:18 PM No comments: